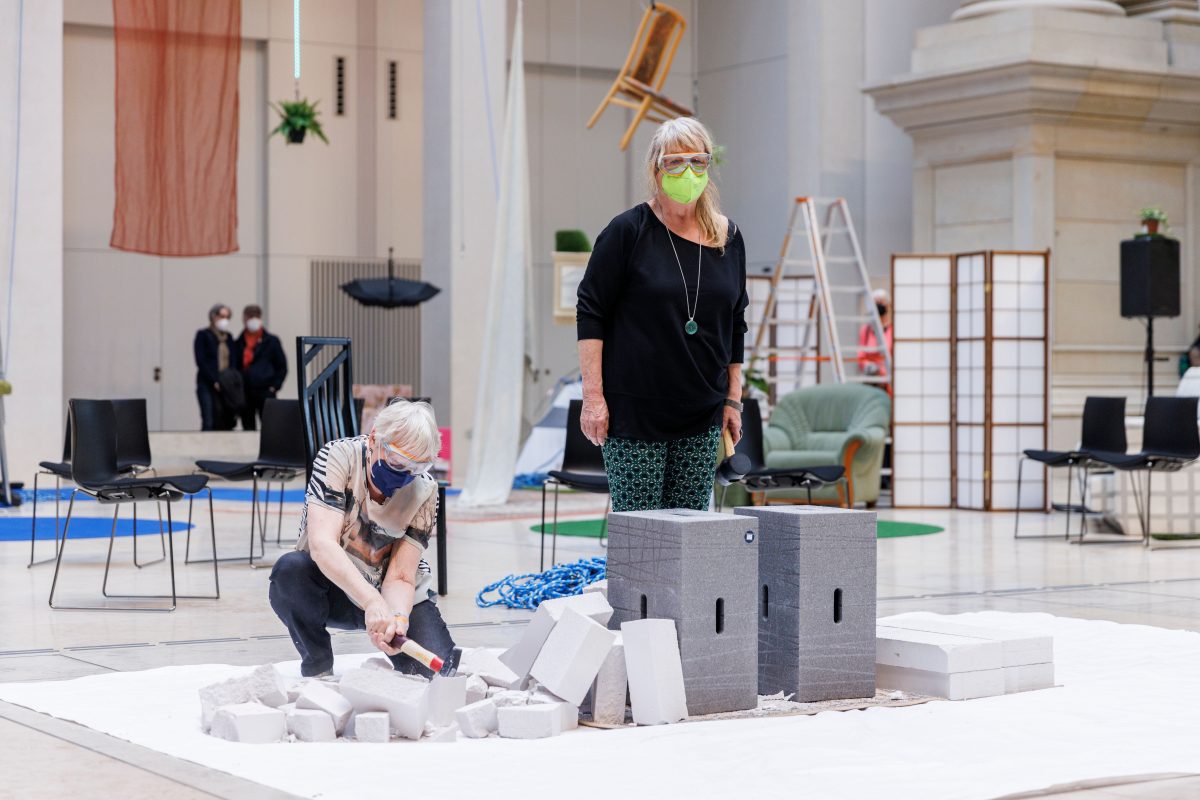 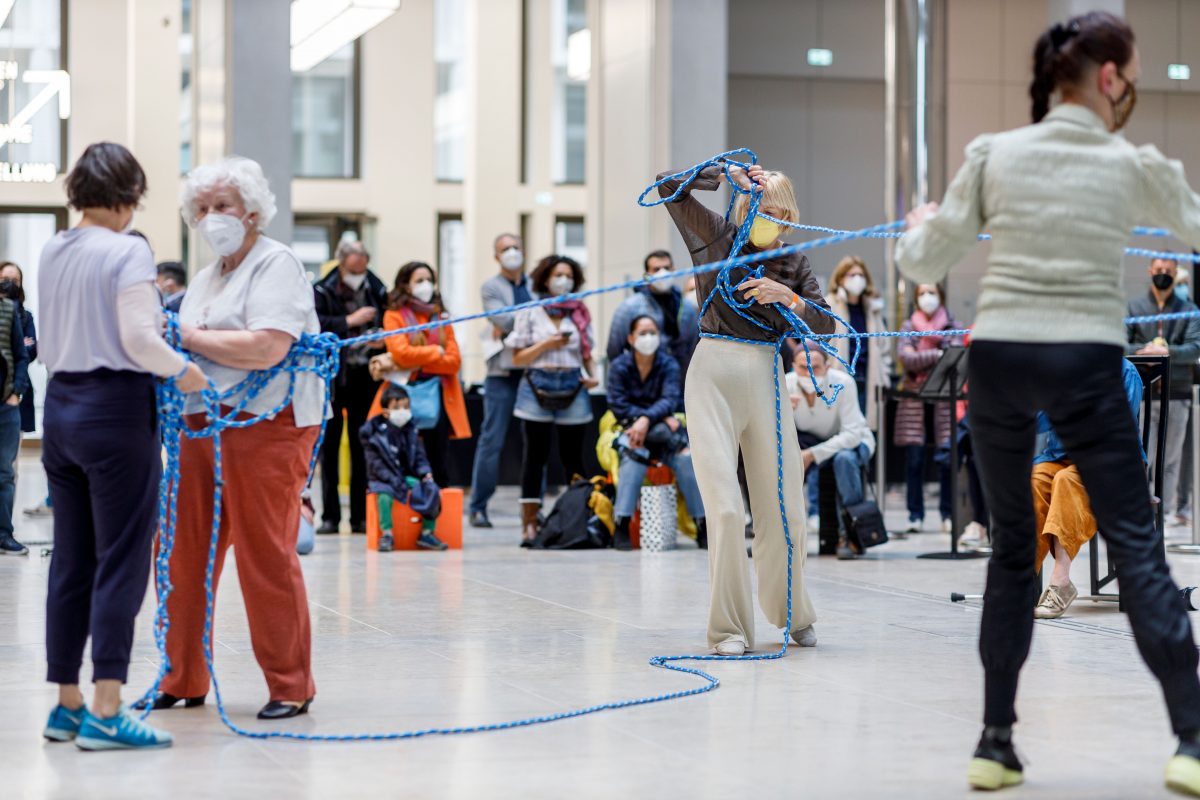 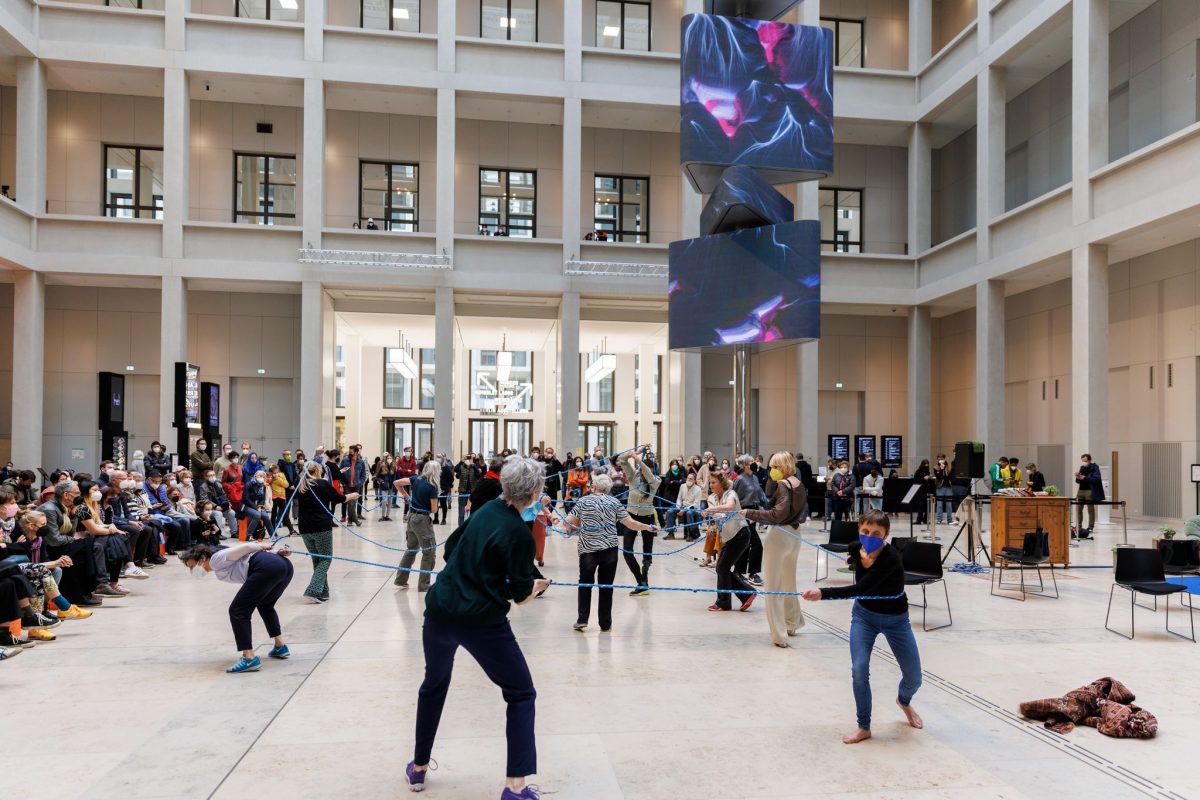 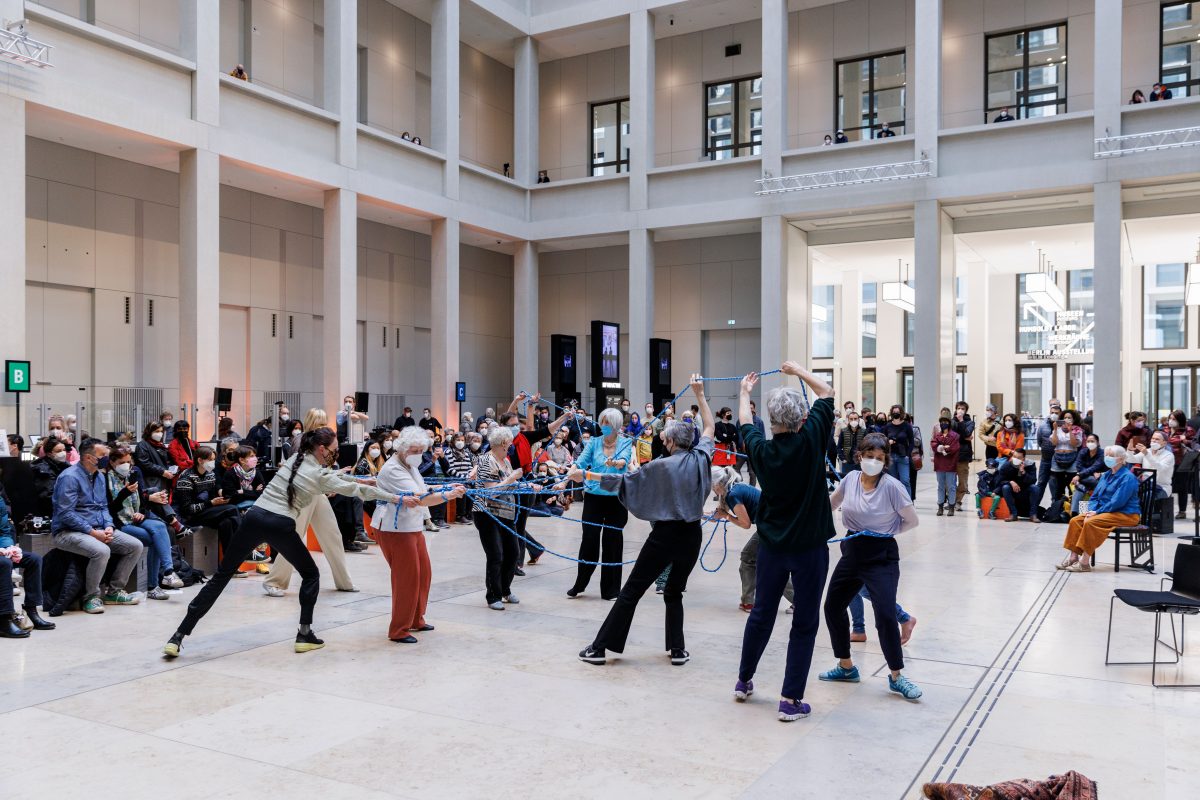 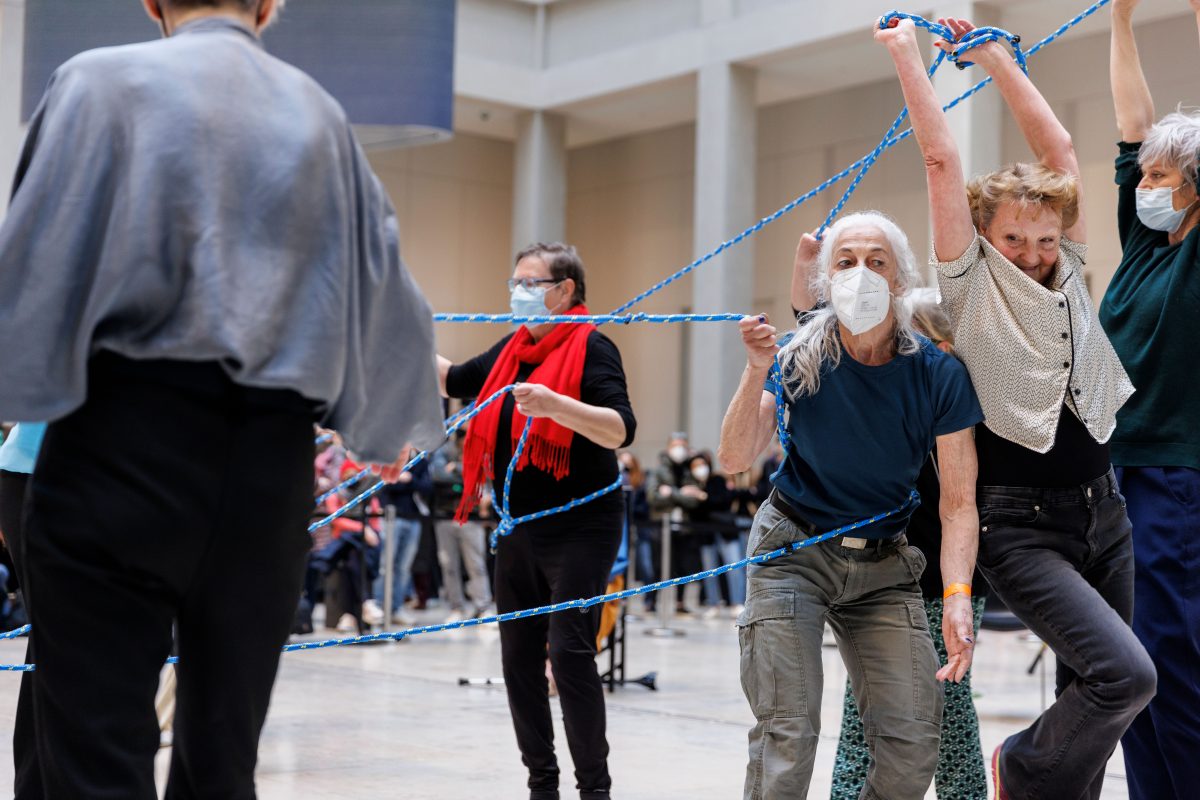 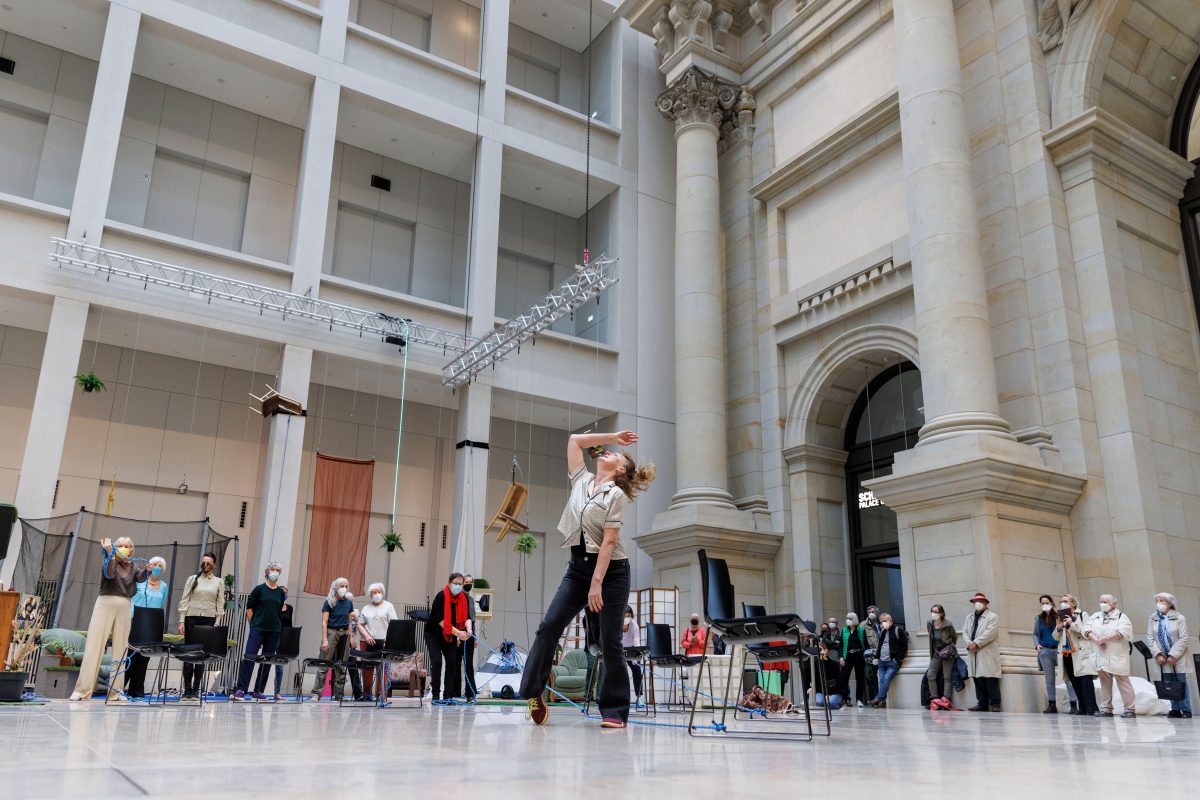 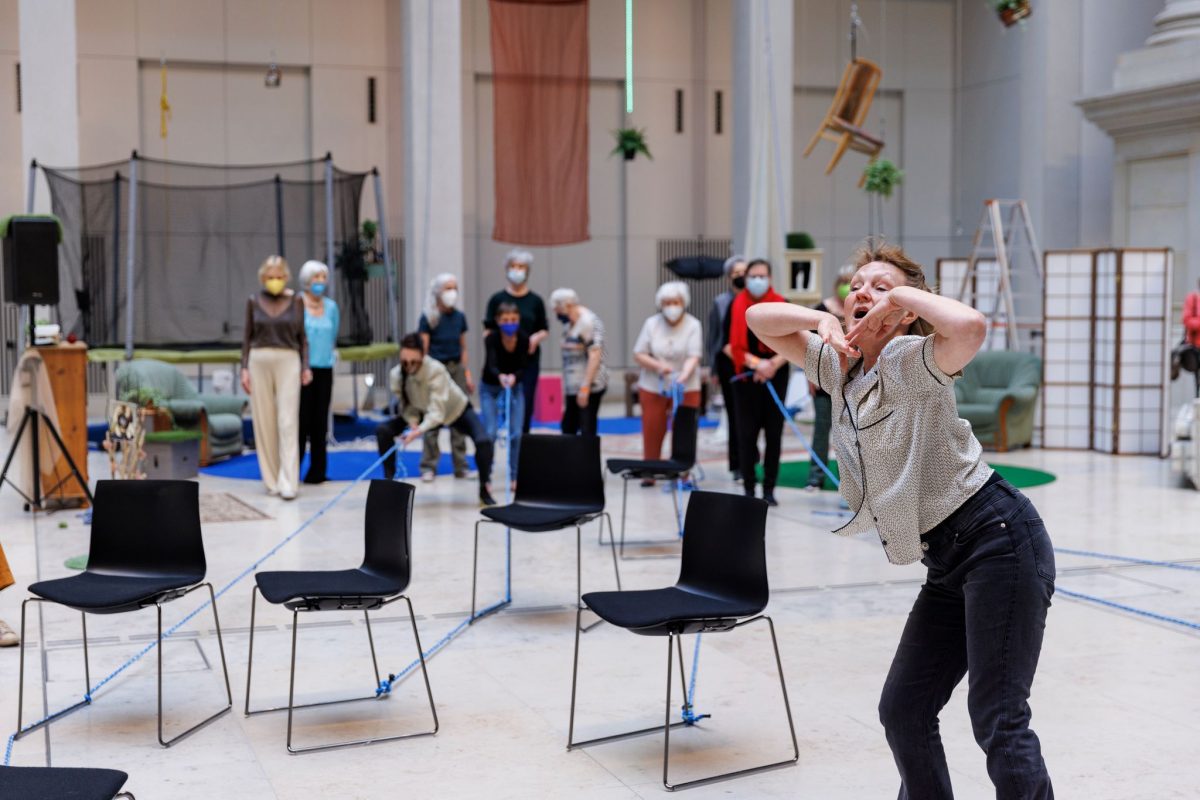 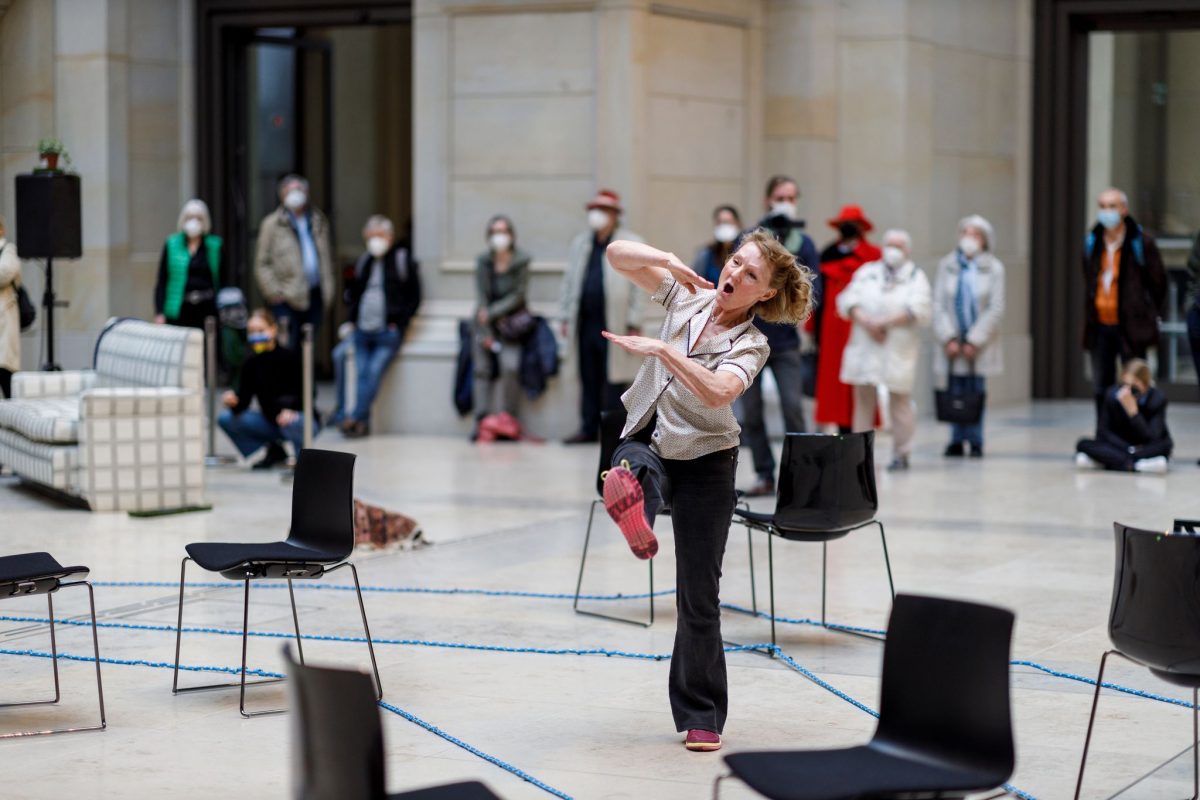 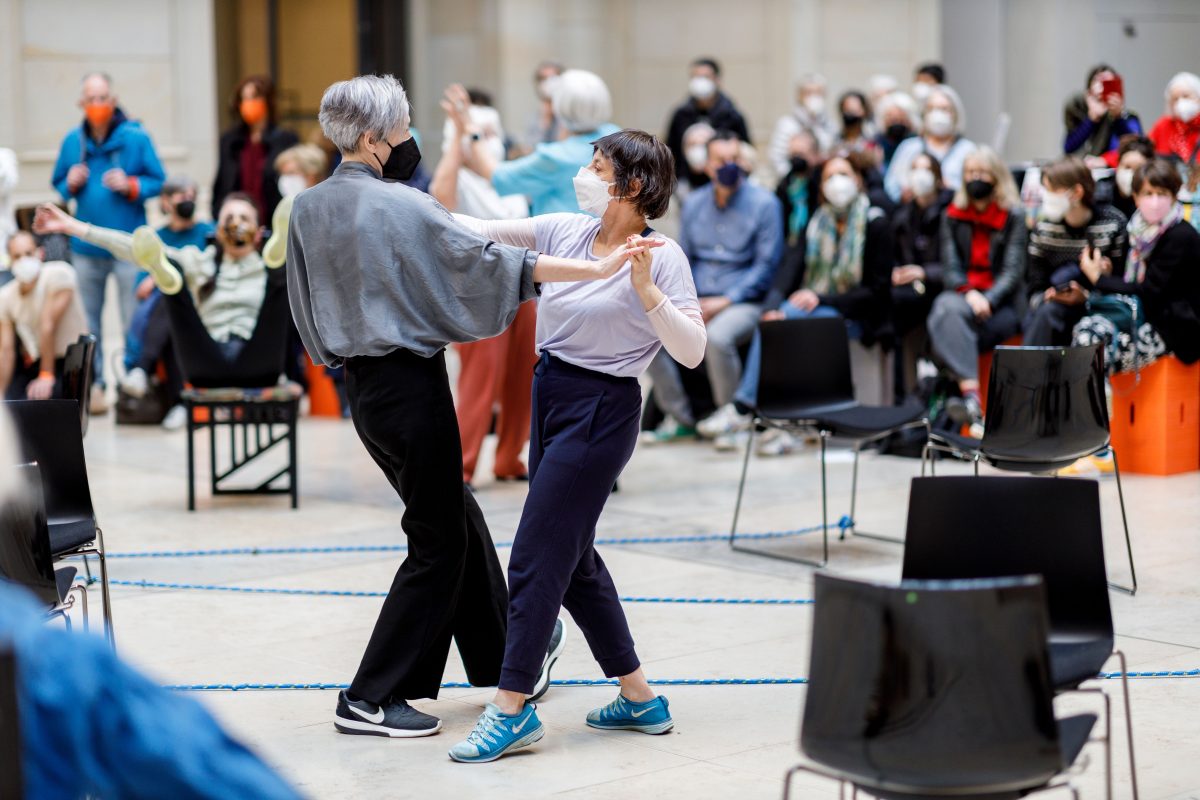 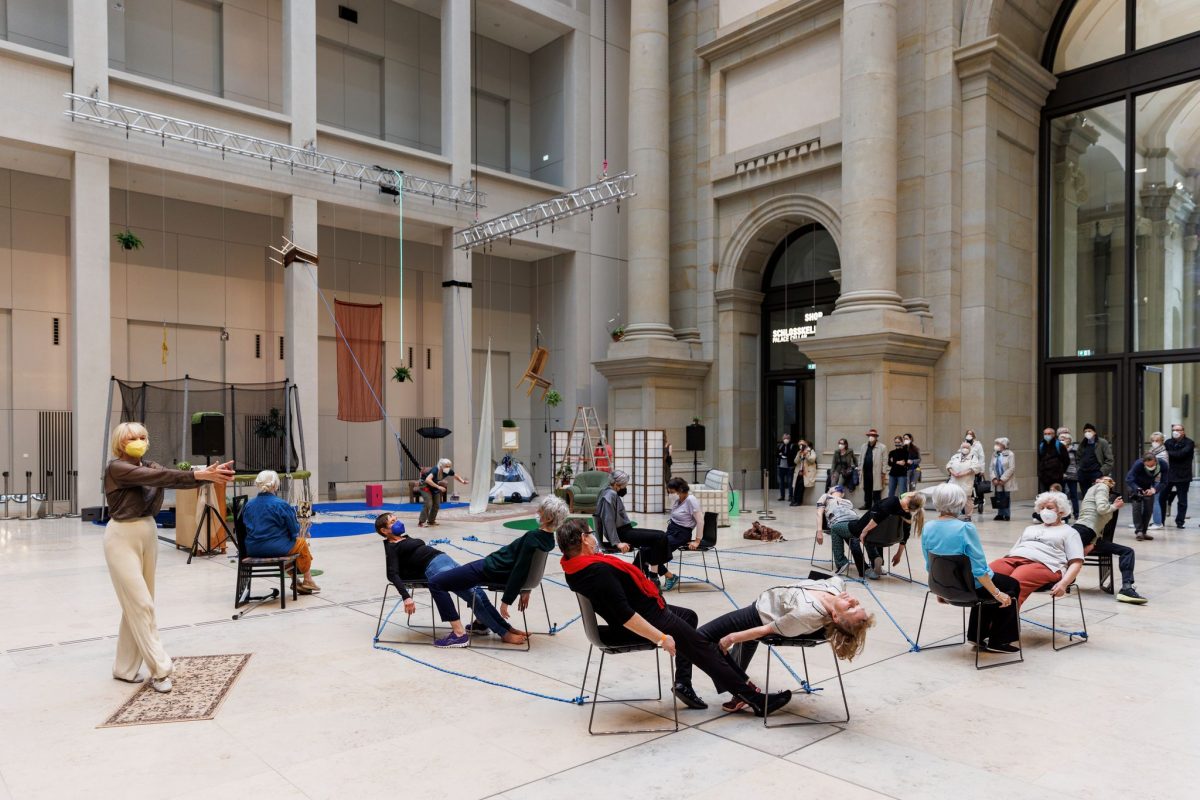 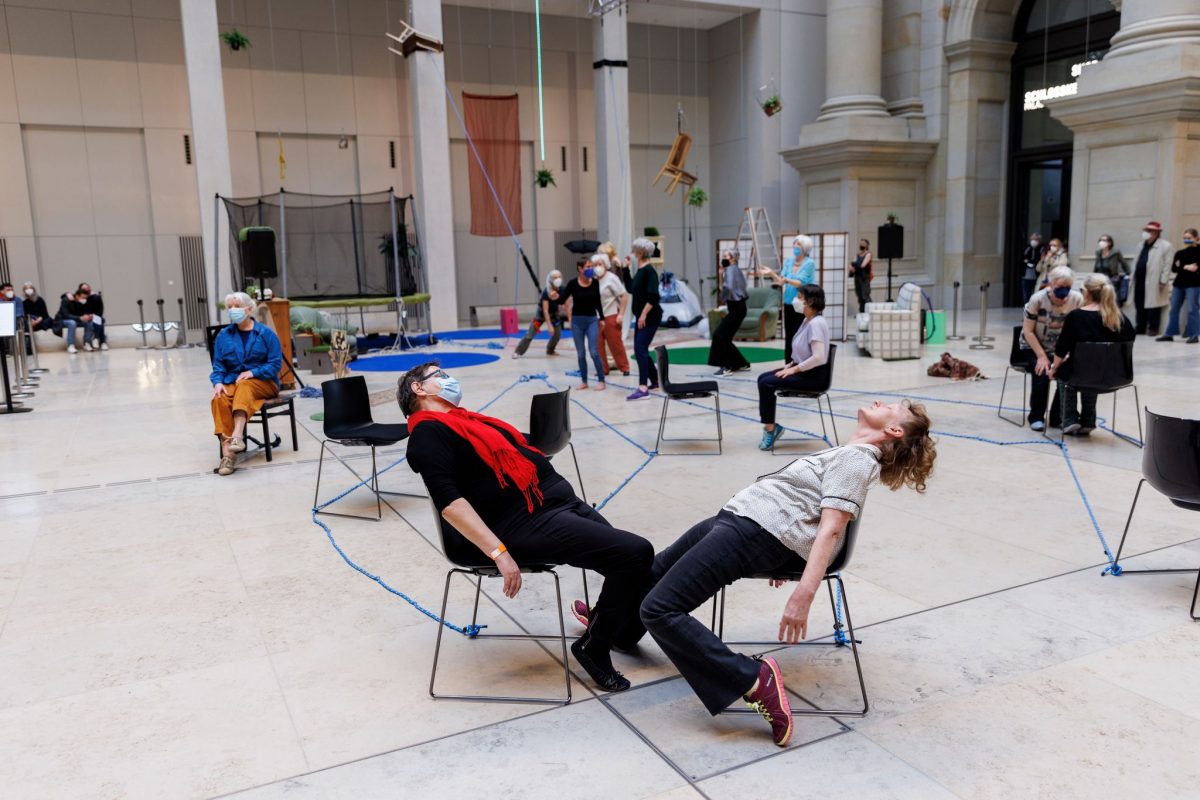 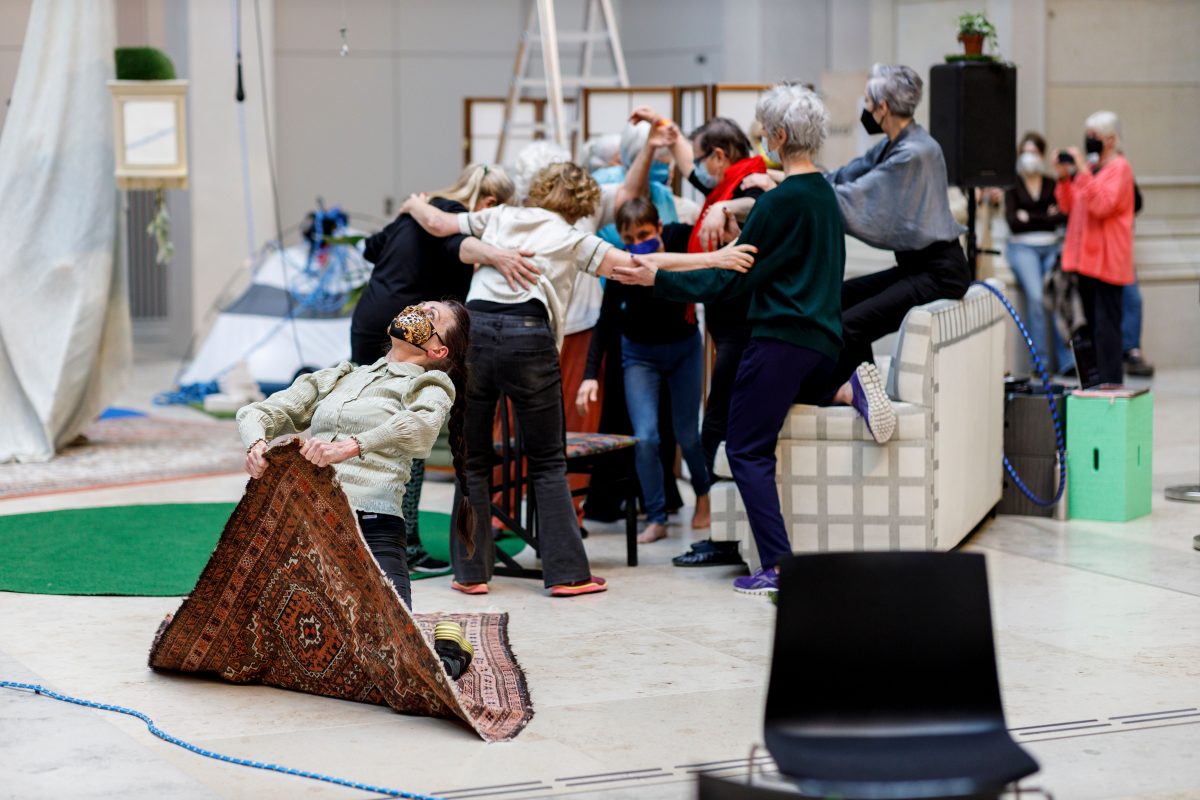 A nomadic performance process revolving around storytelling of mature participants, and the construction of homes, questioning risk and comfort zones within the museum.

The Living Room is a nomadic performance process, an exploration and an expansion to spaces in the museum, interacting with them through a symbiosis.

Our group consists of mature participants, with whom together we aim to construct intimate safe zones inside the Humboldt forum – homes which embody their individual fantasies and needs. We wish to make an experienced body, which has a history and stories to tell, present and moving in the museum, underlining the connection between the past and a tangible future.

We build our home

We are the wild

into a possible future

Home as a reflection of a safe zone. How can we create a vulnerable and brave space inside the museum, which is designated for the construction of each individual’s home, within the conditions and discourse of the HtF?
mature performers as storytellers in the museum. Can a body of a person, especially one that is mature and experienced, be a vessel of sharing history and memories, and influence the course of our future through a performative act?
re-defining physical comfort in relation to social change. Can we, through facilitating a journey which confronts our body with its possibilities and limitations, shake our rigidness, and encourage a constant flux in a society which follows ideals of comfort, fixation and security?

was born in Kibbutz Beit Keshet / Israel, in ‘89, and has been practicing fine arts, athletics, and Capoeira since childhood. At the age of 21, after finishing his military service, he began dancing, and later on pursued higher education in contemporary circus.

In 2015 he relocated to Berlin, and since then has been working as a freelance performer with several European choreographers, among them Maura Morales, Yann L’hereux, Troels Primdahl, Jill Crovisier and Mitia Fedotenko.

Alongside performing he has been creating his own choreographic work, which toured festivals and venues in Israel, Germany, Poland, Italy, Spain, France, Denmark, The Netherlands, Norway, North Macedonia, Luxembourg, Japan, Thailand and Vietnam, and received several awards.

As of 2018 he acts as choreographer and artistic director of the ensemble ‘Yotam Peled & the Free Radicals’, dedicated to the creation and distribution of contemporary interdisciplinary performance internationally. Yotam has been a guest teacher and collaborator in Fontys Academy of Arts, Folkwang University of Arts, Dock11, Munstrum Theater, Cie. Hors Surface, Cooperativa Maura Morales, Overhead Project, PRISMA festival, and numerous festivals and dance studios in Europe and Asia.

born 1992 in Wuppertal, is a Berlin-based dancer and choreographer who holds a bachelor’s and master’s degree in dance and choreography from Folkwang University of the Arts.
She has worked with Tanztheater Wuppertal, Pina Bausch, Johannes Wieland, Henrietta Horn and Jakob Ahlbom and is currently collaborating with Yotam Peled & The Free Radicals, Jann Gallois -CieBurnOut, Jill Crovisier -JC Movement Production and João Cidade, among others.
Working on the border between theater and dance, Marie continues to break new grounds, both within and outside of herself. Deepening her identity as a performer, she actively creates and tours her own work. In 2019, she won the 2nd Jury Prize for her creation -one more drama- at the Gdanski Festival Tanca Solo Dance Contest.
Investing in the space between intuitive senses, natural instincts and the rational mind, Marie sees movement practice as the key to opening channels to the body’s subconscious and uncovering the creativity and knowledge that lies beneath. Her artistic approach seeks to better understand and make tangible complex structures of human behavior and hidden emotional patterns by providing space for honest sharing, vulnerability and empathy.

was born in Israel in 1994. In 2013, she completed a one-year internship at BatSheva Ensemble Dance Company, where she worked with choreographers such as Ohad Naharin, Daniel Agami and Sharon Eyal. As a freelancer, Nitzan danced in pieces by several independent Israeli choreographers, including the acclaimed “Girls” by Roy Assaf. Since 2014, Nitzan has been a member of Vertigo Dance Company, both as a dancer and assistant choreographer, performing works by Noa Wertheim and Sharon Friedman. In 2019, she moved to Berlin and has since worked with Kenan Dinkelman, Sita Ostheimer Dance Company, and Yotam Peled & the Free Radicals.